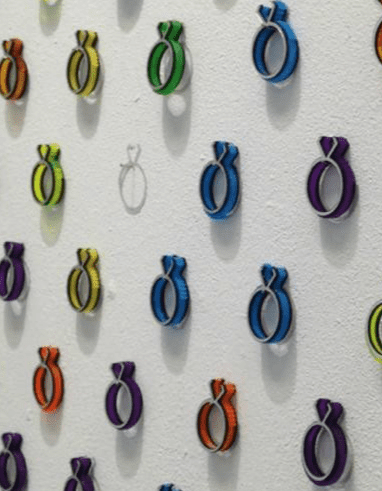 ‘..A kiss on the hand may be quite continental,
But concrete is a girl’s best friend.’

Well ok, it’s probably never going to be our best friend but what about an occasional acquaintance instead?
Plenty of woman around the world look forward to day they dawn a ring with a great big diamond in the setting but maybe there’s another kind of rock us women should consider on our fingers, or do we really need that stone at all?

With her other pieces, she replaced some of the conventional metals and stones with new materials – concrete was one of them but also acrylic, fabric – even soap!

And if diamonds really are a girl’s best friend then chocolate is probably a close second for many of us so what about Kirsty’s white chocolate necklace – the ultimate gift perhaps?

Granted it’s not the most practical of materials over long term but maybe this is the future of jewellery. 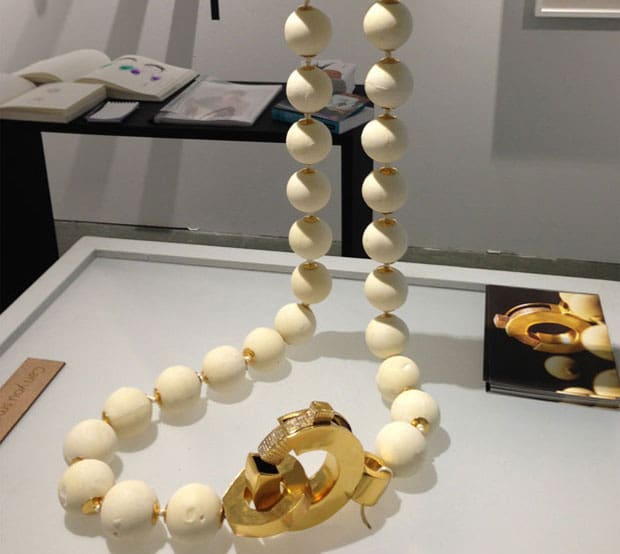 Many women will have worn a sweetie necklace when they were wee (myself included i’m proud to say) but it’s still not often considered ‘grown up’ enough to wear a serious piece of jewellery when it’s edible or even perishable.

We’re already beginning to run out of the world precious resources so maybe jewellery could have a much more reusable or recyclable element to it – wear it one day, eat it the next perhaps?

Jewellery no longer needs to be made of expensive materials to be considered valuable to us so it’s great to see work which really challenges the boundaries of wearable design while experimenting with the substances it’s made from.

Maybe we’ll start to see a much wider spectrum of materials in mainstream stores in the not too distant future.

Well done on your degree show Kirsty – let me know if you need any taste testers for future work…..