Easter’s around the corner. And that brings good news and bad news. The good news is that it’s our first excuse since Christmas to binge-eat our body weight in chocolate. Woo-hoo! Okay, hands up, I might’ve already done that anyway. Moving on.

The bad news is that our social feeds, TV screens and newspapers are going to be littered with the same-old boring egg puns and jokes we’re all tired of hearing every time Easter rolls around. Cue the unimpressed yawns.

So, in the spirit of celebrating Elastic thinkers, we’re taking the opportunity to pay our respects to the brands who’ve chosen not to rehash the same-old, same-old. Here’s an (all-too-short) list of the brands who’ve cracked advertising this Easter (you can forgive us one lame pun, right?).

Last year Cadbury’s took the “egg-hunt” concept to new heights with their “hunt for the white creme egg” campaign, which saw them hiding white creme eggs inside regular creme egg packaging and then rewarding the lucky hunters that found them with cash prizes. The wildly successful campaign culminated in a branded experience attended by over 4,000 people—the company’s largest experiential effort to date.

And this year they’re running the campaign again. But they’ve upped the ante. Rather than confining their ‘devious delights’ to supermarket shelves, they’ve found some more inventive hiding places. From the website:

“White creme eggs are baaaaaaack! But they’re not just in stores anymore. Somehow, these devious delights have infiltrated TV ads, social feeds, billboards, websites, and who knows where else!”

Apparently, the advertising teams at Reese’s UK and Reese’s US don’t communicate much. If they did, us Brits might have been saved the un-egg-ceptional bore-fest that is the Reese’s UK Easter advertising campaign. It’s littered with every over-used egg pun in the chicken pen (I swear I used that last one ironically, honest).

Fortunately, the team over the pond did deliver the goods. Piggy-backing off their #notsorry campaign, they’ve released 2 social media video ads. And there’s not an egg pun in sight. Hurrah! Instead they’ve chosen to fuse their bold brand colours with simple, punchy copy to create 2 15-second video ads that are bound to grab attention.

DISCLAIMER: no cute bunnies were harmed in the making of this playful Easter treat (at least we hope not…)

Let’s be honest, when it comes to creative, light-hearted and slightly mischievous advertising campaigns, we can always rely on Lidl to deliver. From witty puns to cheeky tweets and plenty of banter with their competitors, they know how to inject personality into their marketing materials.

And with the launch of the Easter Nuggets, their approach hasn’t changed this Easter either. The stunt sees them selling a 20-pack of McDonald’s-style chicken nuggets shaped like bunny rabbits. While it might seem like a cheesy idea, they’ve managed to fuse 2 classic British loves: one for McDonald’s Nuggets and the other for “stuff shaped like other stuff.” Simple. But genius.

I just feel sorry for the poor shop-floor staff who’re going to get tired of having to repeatedly tell customers “sorry, we’ve sold out” after they inevitably fly off the shelves. 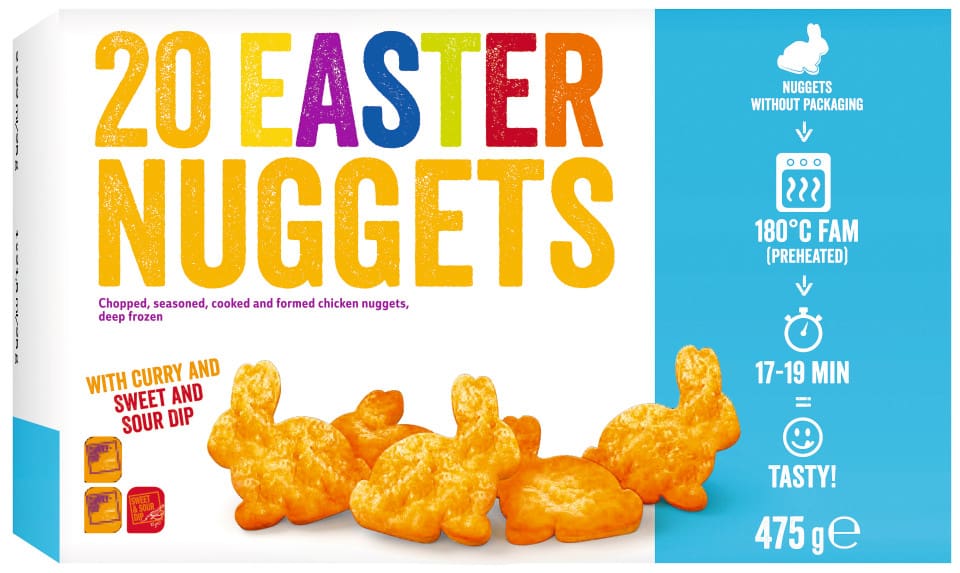 When it comes to public holidays like Christmas and Easter, most brands tend to stick to tired, boring and cliché marketing ideas. And this gives the more adventurous companies-like the ones shown here- the opportunity to stretch their Elastic thinking muscles and really set themselves apart from the crowd in bold, exciting and unique ways. A perfect opportunity to win new business, loyal customers and devoted fans.

But with Easter dropping late April this year, it’s likely that there’s still more to come. So make sure to stay tuned for Part II when we’ll be taking a look at a few more exciting examples of brands harnessing that Elastic spirit as the season gets into full-swing.