Design isn’t always easy to understand: it’s not just art (though some design is), it’s not always visual (though it often is), it doesn’t always involve marketing (though good marketing often stems from good design), but it’s easy to spot bad design in ads, posters, products or everyday life. Here at Elastic, we value good design (and the people who create it), and we love when creativity solves real-world problems, whatever those problems may be.

Here are three examples of creatives who saw a problem and found a way to solve it through Elastic Thinking (and solid design experience):

The agency who bested the 3D-printed gun manufacturers

Back in 2018, American company Defense Distributed released blueprints to create 3D-printed guns at home after a lengthy legal battle that took years to resolve. But 3D printer company Dagoma was having none of it: not wanting to be party to any future gun creation, they hired agency TBWA Paris to help them find a way to block the blueprints from being downloaded.

The team of designers found a unique way to proceed: they downloaded as many real plans as they could, made tiny, unnoticeable tweaks, then reuploaded them with the same file names, in the same places as the authentic ones. Because the tweaks were so inconspicuous — a small angle change that meant pieces wouldn’t fit together, or a diameter just tiny enough for a bullet not to fit through — users didn’t realise there was an issue until after they had tried to use them. The fake blueprints were downloaded thousands of times, and the designers worked to upload them anywhere that real blueprints were located, muddying the waters for people who wanted to download them and effectively making the creation of a 3D-printed gun too much work for the average person to be willing to do.

The vape case that united two sets of activists

We’ve talked before about the largely-unregulated frontier of smokeless tobacco marketing, but this is a new one: last month, the US government began discussing strict regulation of vaping to keep children and teenagers from picking up the addictive habit. In the wake of this, Juul, one of the most popular brands of e-cigarette in the US, suspended all their advertising in the lucrative American market. Some broadcasters voluntarily offered to pull all ads from e-cigarette manufacturers, and the public is paying more attention to the issue than ever before.

Three anonymous designers took the opportunity to turn the conversation back to gun control by creating a vape case shaped like a gun. The case draws attention to the fact that guns are far more consistently deadly than e-cigarettes and represent a far larger risk to public health but remain almost unregulated in the US, which has one of the highest rates of gun violence of any country in the world. Not intended to defend vaping, the project was instead conceived as a way to remind people to consider the government’s priorities and increase gun control activism in a year that has seen an average of more than one mass shooting per day. The subversive approach is working: the website has successfully gathered donations to gun control organisations all over the US. 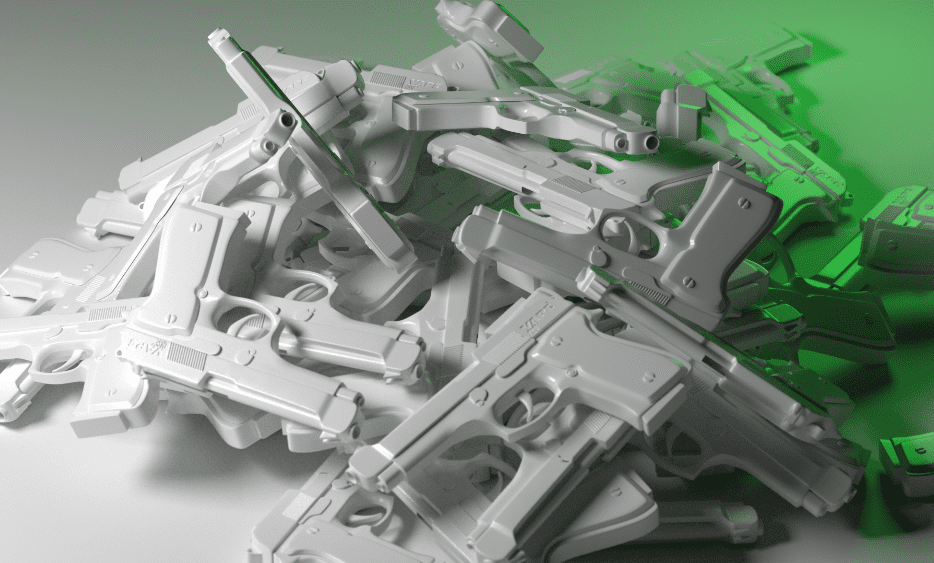 Cold cases are one of the biggest problems for law enforcement today. It’s heartbreaking (and dangerous) to know that perpetrators have gotten away with crimes, but finding the labour force to investigate cold cases when new crimes are happening all the time is challenging. Therein lies the usefulness of cold case playing cards.

Inspired by the ‘most wanted’ playing cards handed out to American soldiers during the invasion of Iraq, prison systems across the US are working with designers to create cold case playing cards personalised to each state’s caseload. Each card features a missing person, a criminal at large, or details of a case that hasn’t been solved in Connecticut, with the goal of generating tips from inmates, who often share past crimes with each other. These playing cards are the only decks available to prisoners, who have loads of time on their hands to play card games. As one spokesperson said, having the cards is ‘kind of like interviewing 93,000 inmates for tips.’ The best part is that they’re scalable: you don’t have to have a deck of cards for each inmate, because most card games are played by more than one person. And they work: in the first two years of the programme in Connecticut, nine cold cases were solved thanks to tips generated directly from prisoners who had used the playing cards. And in Florida, three tips in the first three months after the cards were distributed led to solved cases and criminal convictions — all because a designer created a deck of cards that served a functional purpose (playing games) as well as a loftier one (solving crimes).

It’s easy to fall into the trap of thinking that design is just about creating pretty ads, but the truth is that there’s far more to it than that. If you’re looking for designs that will change the world – or just take your business to the next level – get in touch today!