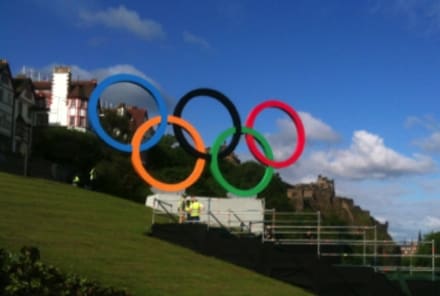 The London Olympics 2012 is getting closer and we are feeling the excitement as this week it’s Edinburgh’s turn to host the Torch Relay. The passing of the Olympic Flame is a practice continued from the ancient Olympic Games of Greece, where the torch was transferred from one Torchbearer to another spreading the message of peace, unity and friendship.

The Torch relay began in the UK at Land’s End on 19 May and has been travelling around the UK with its many Torchbearers. The Torch is due to arrive at the Olympic Stadium on 27 July to light the cauldron at the Opening Ceremony to signify the start of the Olympic Games. Find out where the torch is here –www.london2012.com/torch-relay/route

We have our very own running fanatic, Emily, who recently took part in the London Marathon, finishing in the top 10%. Hear what Emily has to say:

‘OK, so I’m not competing in the 2012 Olympics but this doesn’t mean that I’m not a keen follower of the event. As an amateur sportswoman myself (I have been known to go out for the odd run now and again) having completed the Virgin London Marathon again this year, it was great to be down in London amongst all the ‘hype’. As well as the visual feast for the eyes with advertising for the Olympics, I think the Team GB Kit (designed by Stella McCartney) really stands out and lets face it, image is everything (and of course Going for Gold!)’. 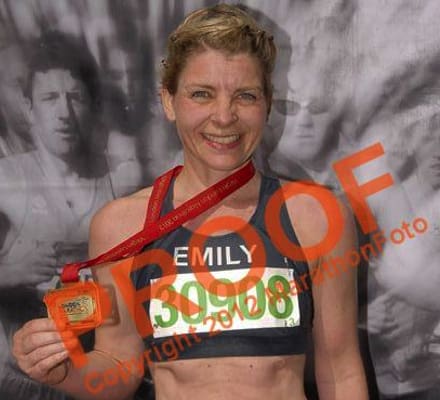 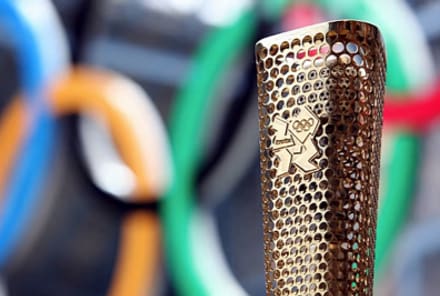 The Torch was designed by east Londoners Edward Barber and Jay Osgerby who won the opportunity through a competitive tender run by the London 2012 Organising Committee and the Design Council. The aluminium design incorporates 8,000 perforated circles representing the 8,000 Torchbearers and their stories of personal achievement and contribution to their local communities. In April 2012 the Torch was recognised as the Design of the Year at an awards ceremony hosted by the Design Museum. Visit us on Facebook and tell us what you think of the design www.facebook.com/teamelastic

The brand identity of the London 2012 Olympics was created by Wolff Olins. The brand desires to call on people to challenge themselves ‘to try new things, to go further, to discover new abilities’. The logo was created to symbolise London’s qualities of a modern, edgy city. It is ‘unconventionally bold’ and has an 80’s feel to it. It is not centred around a particular London landmark or sporting image as it signifies the importance of everyone feeling a part of the event. It is a very flexible logo, and its ability to be applied across multiple media is apparent. The Olympic tickets are brightly coloured with the colour of the ticket and the logo changing to represent different sporting events. 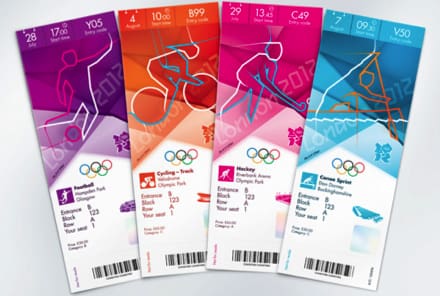 The logo design was met with great criticism when it was unveiled in 2007 and many people petitioned to have it changed. Claims have been made that the logo is racist with people from Iran claiming that it spells out the word ‘Zion’, a biblical term. Some have even claimed that if you squint your eyes it resembles a Swastika! These are pretty bold statements yet it has stuck and we are beginning to gain a sense of the bigger picture of what the brand symbolises as the Olympics draw nearer and the celebratory events start to take place- hear what Guy, our Creative Director has to say:

‘If ever there was a brand that’s grown on me it’s the London 2012 Olympics. From it’s controversial beginnings, (remember the epileptic inducing promotional video!), I believe it has become a great demonstration that a brand is much more than just a logo. With the recent unveiling of the ticket design, it has been really interesting to see the brand evolve and come to life as each piece has been revealed. If something is around long enough and is associated with other parts of the brand, you can come to like it.’

Details of the opening ceremony, entitled ‘Isles of Wonder’, emerged yesterday. Directed by Danny Boyle, the opening ceremony will emulate the British Countryside creating the feeling of a British atmosphere (there will be clouds that will supply rain just in case it doesn’t actually rain). The ceremony will include a ‘village cricket team, 12 horses, 10 chickens, 70 sheep, a model of Glastonbury Tor, two mosh pits, and the largest harmonically tuned bell in the world’. This all sounds quite mysterious at this point and Boyle is ensuring that he doesn’t give too much away.