Adobe is pushing Fontself’s new ColorFonts quite hard this week, and rightfully so. In their latest venture they’ve given us typefaces that have colour built in their very bones; and I love them. When first stumbling upon their wee blog about it I was admittedly negative. Why would you use a typeface where the colours are dictated for you, driving the form and function without even a tiniest glance at your design needs? How can they work with a brand and in branding, generally? So I downloaded ‘Megazero’, their first free offering in the week, to see for myself what Adobe & Fontself were so chuffed about.

Immediately I realised I had looked at the whole charade the wrong way. It’s incredibly playful, and a whole lot of fun. Like an amusement ride themed around something you don’t quite get, but, man, it’s great to ride. I found myself madly typing out as many characters in as many orders as possible. The added colours, so prominent and so confident in their existence within the typeface were jarring, different and full of potential. In a time where Futura is being brought to forefront of creative discussions and its shiny new book is full of colour, it’s perhaps fitting that we’re now talking about something completely new. ColorFont is design at its most fundamental; wishing you’d thought of that. And then, thinking of where it can take you, or you, it. Already my mind is whirling with the routes you could take with such a tool as this; the constraints of colour become fascinating, the practicalities a puzzle to be solved. 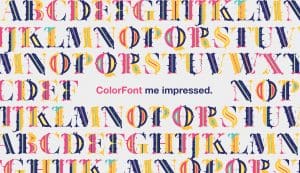 It could be argued that these sparkly new typefaces offer an all too easy solution. And I’d probably agree with it, as a designer can now write out a ‘designed’ typeface with colour sorted out for you. Like WordArt I fear the idea could become overused and quickly dated. Especially as the colours can’t be changed, which limits the way they can be implemented. They’ll be seen everywhere, and most likely in the same state. But that’s kind of like how you see the same Cinema 4D tools in ‘dailyrenders’, or the same new features on any programme being shoehorned into new projects. I’d like to think that ColorFonts is different. Strangely I found myself using the type as a base for patterns and forms rather than written designs. Their colours seducing me into combining them, deconstructing them and reforming them within the constrains of two very fundamental elements; form and colour.

We creatives usually begin with something that’s ‘everyday’ and make it into something designed, crafted, unique. With these new colour punctured fonts there’s going to have to be the same amount of design innovation and forward thinking to make them stand out. Adobe have seen this, it seems, and are pushing designers to make their own ColorFont, through Fontself’s impressive looking tools. The task is enticing, but I’d imagine quite the undertaking. Perhaps this is the real reason this project exists, to get designer’s onto Fontself’s platform and creating their own typefaces. Which is quite genius, and I’ll admit I’m all for it. Either way it’s super exciting and quite refreshing to see how it manifests out of their control in the wild. Perhaps these new typefaces won’t change branding and communication at its core, but give any creative a chance to experiment, to play, and you’re on to a winner. Which is where ColorFonts come into their own.

Blinded by the Type.

Maybe my love for bright colours and aesthetic experimentation has hooked itself onto this project with a biased, haughty grasp. But it’s difficult not to see a lot of potential in these fonts. It’s going to be interesting how they work in print, in web design and animation. Hopefully it’s not a flash in the pan, used for messing around and creating playful designs between more serious work. Possibilities are endless, and I’d imagine Adobe are hoping that ColorFont has designers running headlong into their projects with this new tool at their fingertips. For it certainly makes an impact now, and its future can only be just as colourfully bright.