Social media gets a bad rap from… well, pretty much everyone over the age of 30. Fair enough, as it can cause loads of mental health problems among users, and, indeed, most social media sites themselves are not exactly without flaw. But social media can also be used to do massive good, and just because a social movement begins on Facebook or Twitter doesn’t mean that it’s slacktivism. In the digital era, it’s unreasonable to expect social movements to coalesce almost anywhere else; participants just need to be more careful than ever that the movements we embrace are those that are built to drive specific societal change, and not just to give warm fuzzies to the participant.

The past three years have seen a sea change in internet activism: where, previously, the most one could hope for out of a viral internet social movement was a whole lot of filters on Facebook profile photos, starting in late 2015, social movements began to gain authentic traction on social media. Think of the attacks in Paris in November of 2015: in the days and weeks afterward, Facebook was flooded with profile pictures overlaid with the French flag, a gesture that didn’t really mean anything and which most definitely did not cause any change in the way participants probably thought they were doing. However, in the minutes and hours following the attacks, social media was flooded with posts using the hashtag #PorteOuverte (#OpenDoor in English). During the mayhem immediately after the attacks when police were struggling to respond and people needed to get off the streets, the hashtag was used as a way to let people know where there were safe spaces. Strangers welcomed strangers, helped them get out of harm’s way and sheltered them until the Metro was running again. At scale and with no prior planning, people all over the city of Paris logged onto their social media accounts and opened their doors to those who needed it in an effort which would not have been possible without social media. Changing your profile picture to whatever today’s tragedy-of-the-week is? Slacktivism. Using the internet and, yes, social media to help people or enact real social change that lasts? That’s activism for the new millennium. 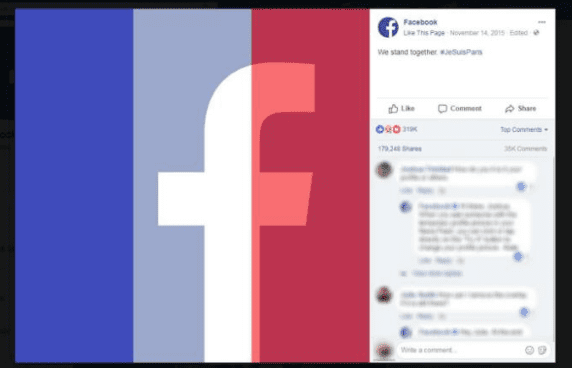 Since 2016, movements like #MeToo (and its sister, Time’s Up), the Women’s March and the US-centric movements March for Our Lives, Black Lives Matter and Grab Your Wallet have made use of social media to plan marches, rallies, protests and boycotts to help initiate social change. While many of these movements have been based in the US, the spillover affects the UK and, indeed, the rest of the world.

So are these movements slacktivism? Well, let’s look at the term a bit more closely: slacktivism involves ‘actions performed via the internet in support of a cause but requiring little time or involvement.’ Crucially, slacktivism is performative activism that allows the participant to feel good about their involvement while also (dangerously) amplifying the idea that change will come as a result of nothing more than signing a petition, changing a profile picture or tweeting a hashtag. In recent years, cries of ‘slacktivism!’ have become a useful way to denigrate the efforts of others to drive societal change, and in an increasingly politicised world, the concept has become a rallying cry for those trying to maintain the status quo.

This definition may be incomplete though, or at least flawed: in some instances, something as simple (and quick) as sharing a hashtag can drive change, as with the #MeToo movement in 2017. Overnight, the sheer number of tweets drove more and more women to share their stories, letting men know more about what women deal with on a daily basis and letting other women know that they were not alone. This in turn spurred the Time’s Up movement, in which men were brought to justice for their actions toward women. #MeToo continues to exist almost exclusively online, but that doesn’t stop it from having driven change across the globe.

In late September of this year, by way of contrast, a social media request flew across American women’s social media profiles asking that they change their profile pictures to a solid black image for one day in protest of violence against women. In the past, similar efforts have asked minorities and their allies to boycott Twitter for a day in order to persuade Twitter to remove far-right rhetoric from the platform. The problem with these actions is that they silence voices that are already being silenced (in these cases, women and minorities), effectively removing them from the discussions they should be at the centre of, and as mentioned, make participants feel like they’ve done their part and don’t encourage future involvement in the movements.

So what’s the savvy activist-in-training to do? Ethical social media activism does exist: take a look at what March For Our Lives has already accomplished in the US: the global rally back in March 2018 involved over 1Million people in the US alone, plus hundreds of thousands more across the globe (including right here in Edinburgh!). What started as a hashtag with clever slogans fuelled by teenage fury translated into a global movement spearheaded by a generation of youths that should not have had to go through the trauma that they have. These students are getting ready to vote in their first elections, and they’ve radically transformed the way in which young people are engaging in the electoral process in their home state of Florida but also across the US, and even across the world.

More than just putting feet on the ground for a single day back in the spring, though, March For Our Lives as a movement has gone on the road visiting universities and towns around the US, registering young adults to vote and canvassing for pro-gun control candidates for political office at the local, state and national levels. Through their efforts, they’ve made registering to vote easier than ever, and the press they generated in the immediate aftermath of the Parkland shooting increased youth voting registrations in their state by more than 40% month over month in the first half of the year. Will those new registrations translate into a lift at the polls come 6 November, when the US elections take place? If so, it could mean the difference between a major swing state maintaining a liberal Senator or adding another seat to the Republicans’ majority at the national level.

Let’s contrast March For Our Lives with the Women’s March, which took place a little over a year before, in January 2017. The Women’s March, by and large, hasn’t mobilised as an individual force since the original march in the same way that March For Our Lives has, choosing instead to throw its weight behind a variety of causes that benefit women at various levels of government across the US and globally. Does that make it a failure? Not in the least. The Women’s March paved the way for #MeToo and Time’s Up to make the headlines that they have done by initiating over seven million people globally into political activism, many for the first time. This newly-activated group was then mobilised over the following months with specific instructions on how to canvass, phonebank, contact their politicians, donate to races and more. While it would be absurd to assume that all attendees of the march have gone on to become political active, the March made political involvement simple, straightforward and (most importantly) accessible to millions of women (and men) across the US.

In the future, internet activism is going to take a bigger and bigger role in the political climate as digital natives come of age. It’s no bad thing: the internet has brought communities of people we’d otherwise never be able to meet straight to our fingertips, and if we can organise with them online faster than in person, maybe change will come faster. How can the savvy activist avoid slacktivism while staying involved politically? Think through the things you’re involved in: make sure that the goals of any movement you participate in are clear, that they’re set out by an organisation you believe in and agree with and that your personal efforts are moving your community closer to the end goals of your movement. If you aren’t involved in a movement, think twice before you critique their methods. They may be harnessing the power of social media for good. Most of all, remember that one person at a time, you can make change.