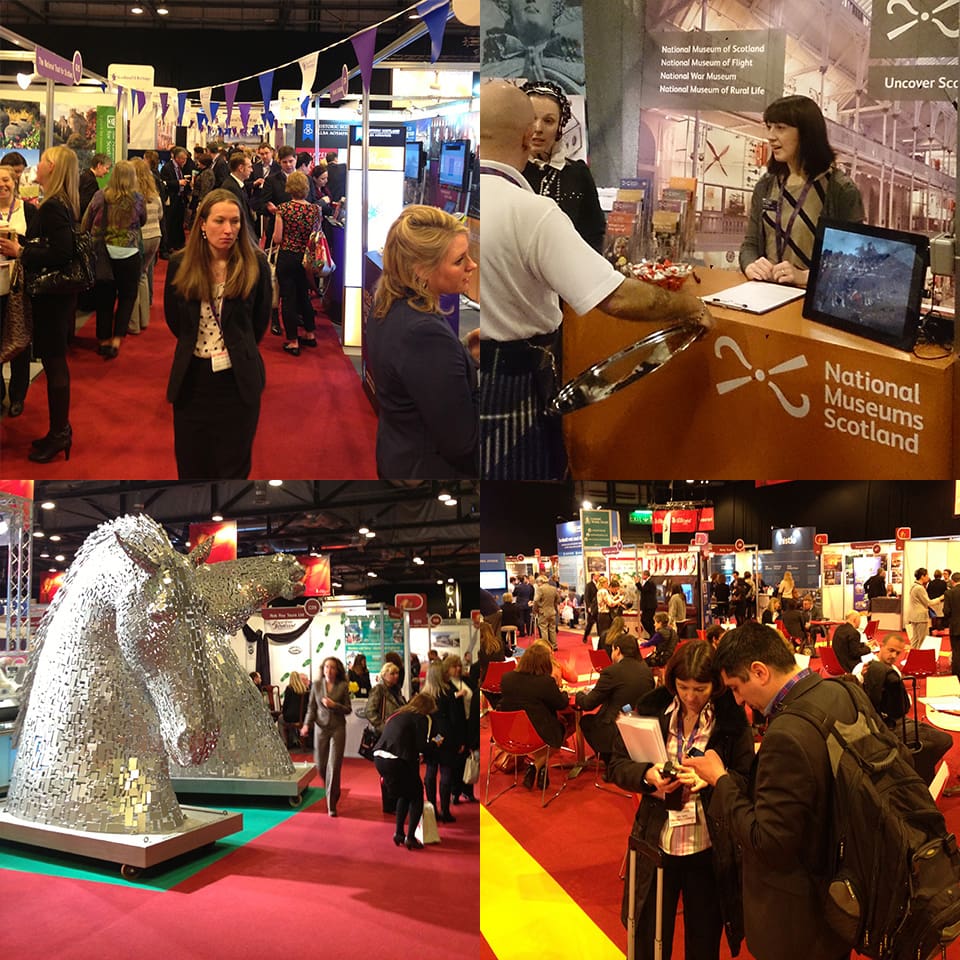 At the SEC last week, the brands that help put Scotland on the map – be they visitor attractions, national parks or tourism boards – were out in force, exalting the benefits and highlights of what Scotland can offer both in 2014 and beyond.

From the many stands I spoke to, a large number of foreign visitors were once again evident; this pertains well to the key events taking place within the country this year. The Commonwealth Games are imminent, bringing a large audience and hopefully a large contingent of overseas visitors and fans not only to Glasgow but across the country as a whole. This will be followed by the ‘third biggest sporting event in the world’ (at least in terms of tv viewing figures). The Ryder Cup holds this remarkable statistic, beaten only by the World Cup and the Olympics.

With our agency experience extending to National Museums Scotland, Historic Scotland, VisitScotland, Dundee Heritage Trust and Skibo Castle we were well placed to see how the Expo was helping create awareness around what the country has to offer. Many smart brands have already addressed concerns with their positioning, messaging, optimised their website, put up a compelling video infographic to their home page and ensured their presence will strongly benefit from the influx of tourism these two sporting spectacles will afford. The real question will be how to ensure the momentum doesn’t drop off in 2015. Given the momentous viewing figures the Ryder Cup will generate, it may well encourage visitors from Stateside at least to visit the country of their great great great grandfathers when they see the backdrop of the Ochil Hills, the valleys where Highland Spring originates from, an area just 10 minutes from where Andy Murray grew up showing Tom Watson et al playing in a beautiful part of the world.

So the Visit Scotland Expo has given large parts of the Scottish economy a chance to engage with those overseas visitors (and our neighbour nations around the British Isles), promote themselves…Andy Murray’s own hotel is already booked up for Ryder Cup weekend unsurprisingly.

Some brands who stood out with interaction and presence were Timberbush Rabbies Crerar Hotels Scotch Whisky Experience  The Falkirk Wheel (and Scottish Canals), National Trust Scotland  Real Mary Kings Close   Visit Scotland Orkney and Dundee Heritage Trust. I may have missed it but where was the representation for Perthshire? Some great brands such as sumptuous Atholl Palace engaged really well but having a regional banner would have helped. With a major sporting event in its territory, creating awareness around the ‘Big County’ would have given visitor numbers gravitas.

Recognising the benefit in being seen as a strong brand/destination which is ready to capitalise on visitor numbers – and build legacy for 2015 – is imperative. How often do we host the Commonwealth Games, Ryder Cup, Homecoming and an independence vote? One way or another this year will turn the world’s eye on Scotland; being in the best possible shape to maximise the opportunities will only happen once.

Elastic provides brand and marketing consultancy. Please get in touch to find out more.