It’s that time of year again! The Edinburgh Christmas Market is already open, and Christmas adverts are already live. Sadly, Christmas songs have been banned at Elastic until December (but a couple of us have managed to sneak some in… don’t tell!). Around this time last year, we looked at why Christmas adverts are so good at getting us into shops around the country, but this year there’s a bit of a ‘bah humbug’ feel in the air. Is the traditional blockbuster Christmas advert coming to an end?

What do you mean there’s no big Christmas advert?

There are a few companies who aren’t shelling out millions for Christmas adverts this year. Instead, the increased spend is more likely to go on digital with more and more people avoiding the high street and shopping online. If you’ve watched some of the ads you might realise that there is a severe lack of massive blockbusters. And the ads that are live are featuring more products and focussing on value for money. It’s really a reflection on the current climate: less high street shopping, more online shopping, less brand loyalty, more value for money, less financial certainty as Brexit looms large, less consumer spending across the board. The nation is feeling a little less flush at the moment, so brands are changing up their usual tactics to get us to spend with them. Both Debenham’s and Marks & Spencer have turned their backs on the traditional tugging-on-the-heartstrings ad in favour of a more commercially-focused one to drive sales.

Despite the drop in festive sales and a changing attitude in Christmas spending, there are still brands who are going for the emotional blockbusters. Some of our favourites are back, some are poking fun at each other and some have just outright won our hearts. Here are a few of my favourites:

Sorry John Lewis, Sainsbury’s has won it for me this year. Relatable, great soundtrack and ‘plug boy’ is just fantastic.

Detailing the struggles of a mother and daughter trying to ‘get’ each other, this ad brings a bit of family feeling to Christmas (and who hasn’t struggled to get a gift for someone they don’t really ‘get’).

This isn’t actually the official Christmas ad but it’s a genius marketing move. Twitter exploded when this came out and you can see why; it has all the same elements as the famous Coca-Cola advert (which has been running since 1995!)… until Kevin hits a patch of snow and it all goes a bit Italian Job. It guaranteed that everyone was talking about Aldi and tuning in for the actual advert, which carries on the story of Kevin the Carrot and his family.

I couldn’t really leave this one off the list since Elastic pretty much turns into an Amazon depot at this time of year. The singing boxes are back with a new tune this year which gives it more of a party feel. Good choice, Amazon!

As the king of Christmas adverts, John Lewis is always going to make the cut of good Christmas adverts. Using a great song and a tugging-at-the-heartstrings message, it shows Elton John’s career from the day he got a piano for Christmas as a child. But the best thing about this advert? Other brand’s responses to it.

Waitrose ran an ad featuring a family fast-forwarding through the John Lewis ad in order to get back to their delicious baked goods. It’s good for two reasons: rushing through something to get to baked goods is something quite a lot of us can relate to, and it’s a tongue-in-cheek comment on the way people are starting to feel about John Lewis ads.

But my favourite response was good old Lidl, because only Lidl could get away with this one: 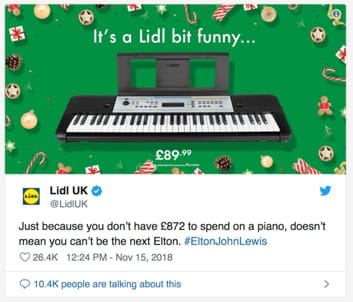 The blockbusters still work because they tell a story that most of us are familiar with, from Christmas dinners to school plays, but they’re in danger of becoming trite, and as television advertising continues to decline in favour of digital, brands are less inclined to spend significant portions of their annual ad spend on a single, non-reusable holiday ad. Deal-focussed adverts, on the other hand, still do the trick, but their primary objective is to sell us products, rather than an experience so they don’t tend to have the staying power or pop culture appeal that the heart-warming messages of blockbuster ads bring to the table.

Regardless of what you’re aiming to sell, it’s important for your brand story to shine through, which is where Elastic can help. Speak to us today about how we can make your brand sparkle.