Crisis Management: Why You Need a Plan

The truth is that your brand could do everything ‘right’, be as non-divisive as possible, and still hit the headlines for something totally outside of your control. And although this might be unlikely, it’s always better to be prepared. Let’s talk about some recent examples that have dominated the news cycle and what we can all learn from their responses.

Let’s get the elephant in the room out of the way. Last year, Starbucks got into hot water after employees called the police on two African-American men waiting for a friend in a shop in Philadelphia, Pennsylvania. As a result, protests were held and boycotts were staged across the US, but Starbucks managed to minimise the damage by addressing the issue head-on. The company let the manager of the store in question go by mutual consent, referred to the arrests as ‘reprehensible’ on national TV, and, most importantly, arranged to close over 8,000 American stores and its corporate offices so that staff could undergo racial-bias training. While the issue continued to make headlines, the fact that Starbucks had a solid plan in place allowed them to centre their positive response rather than the negative actions that precipitated it.

Starbucks may not have seen the crisis coming, but when it did, they were prepared: from issuing in-person apologies to the victims to proactively training all of their employees on how to avoid future issues, their quick action showed customers that they understood the severity of the issue and were doing their best to ensure it wouldn’t happen again. Their quick, sincere response allowed them to shape the narrative, rather than allowing angry (or bad faith) players to formulate the coverage on their behalf.

Homewares company Wayfair was thrust into the spotlight last month when employees found out the company had taken a $200,000 order from the US Department of Homeland Security to furnish the concentration camps at the country’s southern border. Employees quickly organised a walkout and urged customers to cancel their Wayfair accounts, which they did—in droves. And although it remains to be seen how much Wayfair’s bottom line will be affected in the long-term, one thing is for sure: the company handled it badly. After employees demanded that the profit from the $200K order be donated to RAICES, an organisation that works with immigrants & refugees along the southern US border, the company didn’t budge… until just before the protest, when they agreed to make a donation, but not to RAICES. Instead (in an effort to avoid further controversy) they chose the Red Cross, a middle-of-the-road choice that pleased no one: employees felt it was a copout, Wayfair supporters felt it was ‘giving in’ to unfair demands on the part of employees, and worst of all, it was mostly drowned out because they chose to make the donation at a time too close to the start of the walkout, when most news outlets were covering not the company, but the collective action.

Wayfair really doesn’t have an excuse for messing this one up: they made a choice to take a large order from what is undoubtedly the single most controversial branch of the US government but didn’t bother putting together a plan to address the situation. Had they developed a crisis management plan before they got stuck in the middle of such a contentious issue, they might have fared better. As it is, their Twitter feed is dominated by complaints from users haranguing them for their involvement with the detention camps and the delay in their original response only exacerbated the issue.

A crisis doesn’t have to be a matter of legality—or even ethics. It can also just be a joke that threatens your carefully-cultivated branding. Back in April of this year, a joke about ‘kids named Kyle’ featuring Monster Energy Drinks went viral on Twitter. If that had been the end of it, there would have been no harm done, but then comedian Trevor Wallace released a longer-form video on the same topic, in which Monster drinks feature prominently. Although several brands feature in the video (including fellow beverage brands Fireball whiskey and Mountain Dew), Monster is the most prominent—and the most in danger of fallout because of the video.

This may not be a crisis of the same proportions as the others on this list, but it does erode the brand’s positioning as well as its marketability. If viewers start associating Monster drinks with ‘rage-filled and aggressive’ teens, it’s only a matter of time until Monster loses complete control over their own brand—no matter how carefully they’ve curated themselves until now. Monster couldn’t have seen this one coming and it’s completely not a crisis of their own making, but it’s still worth keeping an eye on it. While it might not merit a public response yet, Monster should definitely be keeping an eye on it internally to make sure it doesn’t blow up in their faces.

Learn from the mistakes of your competitors

From KFC to Lush, Instagram to Amazon, even big-name brands face crises, and, chances are, your brand will have its own someday. Don’t panic: a good marketing strategy can help you prevent the worst crises, and having a plan in place will give you the peace of mind to avoid costly mistakes when the time comes.

How do you make a crisis management plan? It starts with knowing your brand. A well-defined brand voice, ethos and look & feel can help you know how to behave consistently even when stakes are high. When Axe Body Spray got tagged in a tweet implying they were homophobic, the brand didn’t waste time debating over how to respond—they just tweeted back in their normal brand voice and got on with it. 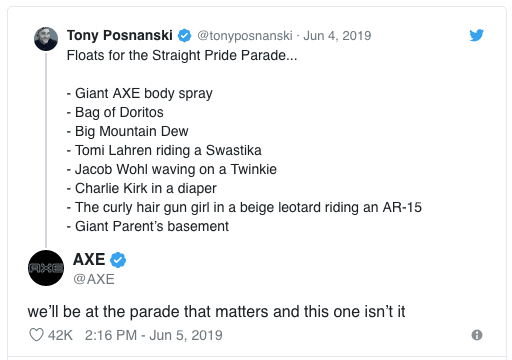 Why were they able to respond so quickly and succinctly? Because they know what their brand stands for, and they’ve spent years cultivating a brand voice that their fans and followers know and love.

There are times when your brand might get caught in the crossfire even if you haven’t made any mistakes, and when it happens, it pays to be prepared. Know your brand, shape your own story, understand when it matters enough to respond and most importantly, don’t be afraid to say you’re sorry if it’s needed.

Not sure what your brand personality is? Elastic can help! Our brand workshops are specially tailored to your business to find insights that propel your brand forward. Contact us today to find out how!