As part of the Elastic Thinkers series, we’re featuring people that have inspired us with their revolutionary ideas, work and creativity. Those that break the rules and barriers within their field – unafraid to explore and experiment.

I’ve never been much of a ‘fashion’ person – I don’t really see the point in spending £500 on a t-shirt, I wouldn’t be able to tell a Gucci from a Givenchy and rarely wear anything that isn’t black.

But I was lucky enough to see the V&A Savage Beauty exhibition in London and it changed my whole perspective. Here was someone doing things differently.

Lee Alexander McQueen was born in London in 1969 and left school at 16 to become an apprentice at Savile Row tailor, Anderson & Sheppard – where he learned about the technical construction of clothing. He then went on to assist designers such as Koji Tatsuno and Romeo Gigli, before completing a Masters degree in Fashion design at Central Saint Martins. His entire graduation collection was bought by Isabella Blow, who became a mentor of sort to McQueen – encouraging him to drop his first name to appear more aristocratic to the fashion world.

Despite this, McQueen expressed disdain for the elitism of the industry. And the public didn’t quite know what to make of him and his controversial creations either. He was often branded as a misogynist in the earlier years for the dark and often brutal designs worn by his female models – McQueen vigorously resented this, stating that “When you see a woman wearing McQueen, there’s a certain hardness to the clothes that make her look powerful… I want people to be afraid of the women I dress.”

What we know for sure, is that McQueen created a solid brand for himself that set him apart from the other competition in the fashion industry and left the world wondering what he would do next. 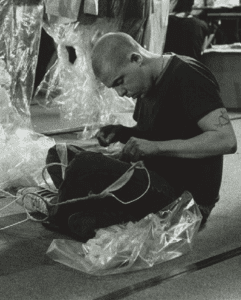 McQueen’s work wasn’t just technically impressive – it was saturated in his personality, conceptual ideas and beliefs. Taking inspiration from folklore, historical events and film. Even basing some of his collections on the work of Stanley Kubrick, Alfred Hitchcock and Martin Scorsese.

Thorn crowns, prosthetic legs, birds nest head-dresses and spine corsets. Grotesque and beautiful, all at the same time – challenging what fashion could be. 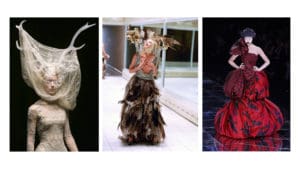 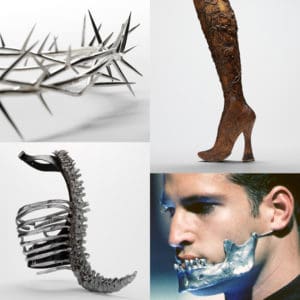 “I want to change attitudes, if that means I shock people,

Spray painting robots, live moths, holograms and glass enclosed cases for runways – McQueen’s fashion shows were ground-breaking for the fashion industry and known for their shock tactics and theatrics – pulling together elements of performance art, cinema, circus and dance. All with the intention to evoke an emotional response from the audience. 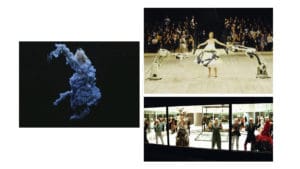 “When I’m dead and gone, people will know that the 21st century

was started by Alexander McQueen”

Lee Alexander McQueen tragically took his own life in 2010 and will never know the true impact of his creative thinking and work on the fashion industry and beyond. His work is a testament to being fearlessly creative and experimental. After all, nothing great ever comes from playing it safe.