It’s no secret that we love a good bit of history here at Elastic, whether it’s art, film, comic book or marketing related. But it’s not just the best marketing campaigns that make history – sometimes the worst ones do, too. And though being prepared for any eventuality is the hallmark of a good ad campaign, sometimes there are events no one could have foreseen coming. Check out the below for a few examples of campaigns that would have succeeded if the unexpected hadn’t hit, and find out what we can learn from them!

You’re Definitely Alone With A Strand

When Strand cigarettes went on the market in the late 1950s, they launched with a bang… followed by a whimper. The ad featured a London night scene, with an empty street and a be-hatted man puffing on a cigarette while a background tune (aptly titled ‘The Lonely Man Theme’) played and a voiceover announced, ‘You’re never alone with a Strand.’ The actor from the ad became a star, ‘The Lonely Man Theme’ hit the UK singles chart, and the ad was wildly popular.

So what’s the problem? The ad was so popular that viewers remembered only the ‘lonely’ bit and associated Strand with loneliness, so they didn’t buy them. Less than 1% of smokers ever bought a pack, and the brand was unceremoniously pulled from shelves just a few years after launch. The moral of the story? Show, don’t tell. Want your customers to NOT feel lonely? Don’t show them a lonely man!

In what surely must be the pinnacle of ‘only in the 80s’ marketing efforts, Domino’s marketing agency came up with the ‘Avoid the Noid; ad campaign in 1986. The premise was that a claymation creature called the Noid hated pizza and would go to any length possible to ruin yours before the pizza shop delivered it to your door. Domino’s, of course, had the secret to avoiding the Noid and delivering fresh, hot pizza to your door in 30 minutes or less. The campaign was so popular it spawned a Saturday morning cartoon, two video games, and is still generating mentions in TV shows like 30 Rock, The Simpsons and Family Guy, all decades after the campaign ended.

While the ‘30 minutes or less’ would get them in trouble later on, the ‘Avoiding the Noid’ part nearly cost the lives of two employees in Atlanta, Georgia in 1989, when a mentally-ill man named Kenneth Noid held up a Domino’s and took the employees hostage. He believed that the campaign was targeting him specifically, telling people to avoid him and, well, the headlines pretty much wrote themselves – especially after the police chief’s official statement after the incident was simply ‘he’s paranoid.’

Domino’s kept the mascot going for another six months, but the writing was on the wall – the concept was tainted and the brand couldn’t avoid the association with the hostage incident, so the Noid was discontinued. This is a perfect example of why your brand should always be prepared for a PR crisis, even one that’s not your fault.

Back in the 1980s (notice a theme here?), American Airlines was on the verge of bankruptcy. New regulations had hit them hard, and they needed money – fast. Enter the AAirpass: a lifetime first-class ticket for customers who could afford the steep price tag of $250,000 (over half a million in today’s dollars). On paper, the AAirpass was a great idea: it enabled the airline to raise the needed revenue from their passengers rather than through loans, and because of the prohibitively high cost, they wouldn’t be able to sell very many, right?

Wrong. Either they didn’t do their due diligence or they simply underestimated human greed. Twenty-eight AAirpasses were sold, and, by the mid-2000s, the most frequent travellers were costing the airline over $1Million per year… EACH. But there was no out clause in the contract, so American had to play dirty. They stripped the passes from the three holders who flew the most, terminating their right to ever fly with the airline again. The customers sued, but American filed for bankruptcy just months later, and the customers received nothing in return. Overall, the programme cost American Airlines millions of dollars over three decades and contributed to the airline’s eventual downfall by running up more costs than high-interest loans would have. The lesson here is simple: do your homework if you’re proposing a ‘too-good-to-be-true’ deal, and make sure you’ve protected your brand. But if you find yourself in a mess… maybe don’t go after your top customers, who have potential to bring tonnes of new clients your way. 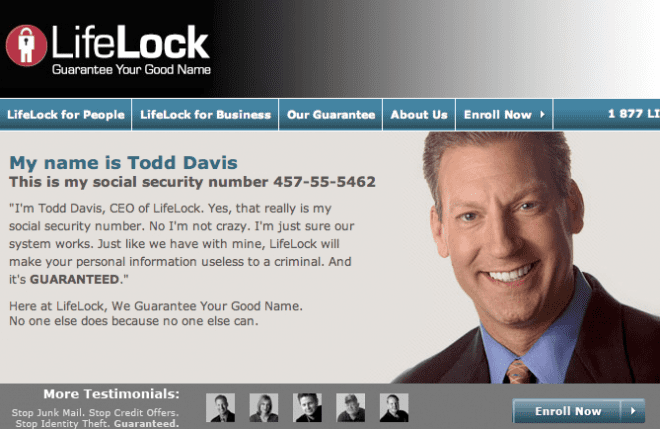 You know what’s coming. The invitation was too good for baddies to resist, and Davis’s identity was stolen over a dozen times (and, presumably, counting – you can’t change your social security number, so it will always be out there). This spelled disaster for the brand: not only was it a colossal headache for Davis himself, but in a field where trust is the most important thing, it also does damage to the brand to see the CEO taken advantage of. Most importantly, though, the product failed miserably and publicly. How do you come back from that? You sell the company to Symantec and hope for the best. The lesson here is clear: don’t put your CEO out on a limb unless you’re really sure you can deliver. And… maybe don’t share your private financial information publicly, even if you do think you’ve got it on lock.

Way back in the dark ages of 2007 when we were all still obsessed with this new thing called guerrilla marketing and not yet cynical enough to be scared away by it, the Aqua Teen Hunger Force film launched a guerrilla marketing campaign in a few major American cities, including Boston. The campaign involved putting light-up ‘Mooninites’, characters from the film, all over the city in places like underpasses, train stations and highways. This is what they looked like before being lit: 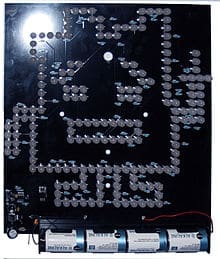 With an exposed circuit board on the rear and several batteries on the front (and placed where there are crowds of people), it’s… understandable that people panicked. The authorities were brought in to blow up a few of the devices to ensure they were not dangerous, entire roads were closed, and news stations all over the US covered the story.

So was it an overreaction on the part of the public, or did Aqua Teen Hunger Force mess this one up? A little of both, honestly: their target audience was basically ‘people under the age of 25,’ but they placed the Mooninites in spots where the majority of viewers would fall outside their target audience and have no idea what they were looking at. The city’s response could have been a little more relaxed, but using guerrilla tactics meant that when the police were called, there was no record of the campaign and no way to confirm whether the devices were dangerous or not. Here’s what we can learn from this: if you’re going to stage a guerrilla marketing campaign and break laws in the process, make sure whatever you’re doing isn’t also going to start a panic so bad that people think the city is under attack.

Want a marketing campaign that drives ROI and won’t tank your entire brand? Elastic does that! Contact us today to find out how we work with brands like yours to drive marketing success, no matter your goals!